Since opening her renowned flower school 20 years ago, Judith Blacklock has worked with famous faces ranging from actors to royalty. 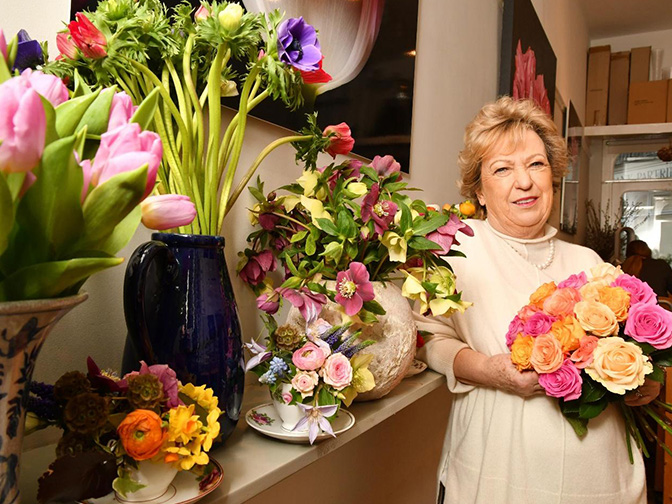 Since opening her renowned flower school 20 years ago, Judith Blacklock has worked with famous faces ranging from actors to royalty.

Listen up, Tyson Fury – Judith Blacklock has a message for you. “Tyson, I’m a huge admirer and I love the fact you are six foot nine and I think you show all the skill of being one of the best flower arrangers ever. Come and join me!”  Judith, who has been running her renowned flower school in a pretty little mews off Kinnerton Street for 20 years, thinks the heavyweight boxer could be persuaded should he spot the invitation in Belgravia magazine.

“I think he would, I think he is man enough,” she says. “He is only one foot nine inches taller than me; it would be a great picture!” Refreshingly straight-talking – though conscious not to reveal too much (particularly juicy nuggets of conversation are gently consigned to “off the record”) – Judith’s charm and expertise have been attracting an international clientele to Belgravia for two decades.  As well as offering classic and contemporary floral arranging courses – she is the only school in the UK to hold accreditation by the British Accreditation Council and the American Institute of Floral Designers – Judith has found the time to write 17 books and also edits a quarterly magazine called Flora. “I was editor over 20 years ago for three years, but I couldn’t change it because it was owned by somebody who wanted to keep it as it was,” she says. “Her husband was the designer and it was her baby really, so I left and then I was asked to be editor of another flower magazine where I stayed for 13 years. “I retired and then three-and-a-half years later, the publishers of Flora came to me and said, ‘Would you like it?’ and I decided to take it on.” Juggling it all simply means “going to bed late and getting up early”, she says matter-of-factly. “I started at seven o’clock this morning and did a couple of hours [work on the magazine] and then I drove in from Barnes.”

Her family roots lie much further north. She grew up in a village in Cumbria, before being sent away to a sixth form college and finishing school in Oxford aged 16. “I had a wonderful time, but perhaps didn’t work as hard as I should have,” she says. After Oxford, she made her way to London, working in the City for three years. Fate would dictate that she moved into Parkside in Knightsbridge, barely five minutes’ walk from the school that would later bear her name and where we are now sipping tea. “I only came back to this area once [during that time],” she says. “I think it was at the weekend and there was nothing happening, so I went away and never came back until all those years later.”
After 12 years living abroad – six years in Brussels and six in Paris – she moved back to England when her husband, working in the pharmaceutical industry, started a new job.

Cultivating a career with flowers only began when Judith was looking for something she could do with the children after moving back to the UK. “My mother exhibited at Chelsea and got many medals – she is a better arranger than I am – but she always did it as a hobby. I decided to do flowers and only then, once I started did it become a passion.”  Her career really began to blossom once opportunity knocked at the turn of the millennium. “I was approached to see if I wanted it [the Kinnerton Place South site] and it was the right time, simply because my father had died and I had a little bit of money. Not a lot of money, but some money and I was able to do it. I wouldn’t have been able to do it otherwise.  “My husband was working at the time and financially it wasn’t such a big commitment and the children were at a sufficient age – I think they were 16 and 18 – that they didn’t need me that much.”

The characterful corner plot was previously home to another flower school run by Mary Adams. “She was working here until she was over 80,” says Judith. “She contacted me to see if I wanted it and I knew I would never have an opportunity like that again.”  When she first arrived, there was much work to be done. “It was very rundown,” she says. “It was full of dried flowers, the whole place made you sneeze. And yet, full cycle, dried flowers are now back in after 20 years of not being anywhere in the UK as they have been passé.”  Judith “completely stripped it out” and found the first year tough. “I got a £1,000 grant from the government and it really helped, it made all the difference. Grosvenor have been very good to me; they are not soft or pushovers, but I think they are fair.”

Times have certainly changed. Judith says that when she started out there were only two flower schools in London – Jane Packer being the other – and now the increased competition tends to “nibble at the market”. Nonetheless, her stellar reputation continues to attract people from far and wide and she continues to adore Belgravia – singling out Anton Mosimann, The Fine Cheese Co and Mayhew newsagents for particular praise – and counts herself incredibly lucky to be part of such a community. “I’ve got the best location, not only in London, but in the country. Could it be the world? The fact that you can find a billionaire having a pint with the postman, isn’t that wonderful? Where else would that happen? I think this area is incredibly special.”  Tyson, if you’re reading, the invitation is very much on the table. It’s your move.

“The fact that you can find a billionaire having a pint with the postman, isn’t that wonderful? Where else would that happen? I think this area is incredibly special”

From creating bouquets for members of the royal family to appearing on reality show Made in Chelsea, Judith has given her expertise to an eclectic selection of famous faces.

“She was fantastic, the most lovely person. In fact, she wrote a review on one of my books.”
– Keeley Hawes

“He was very good. He was that typical chap; so many come and think, ‘What am I doing this for’, and yet they get into it and absolutely love it and he was very good.”
– James May

“I taught on The One Show and he was awfully nice. It’s all a big act isn’t it really? He made a hand-tied bouquet and he was good; clever and quick.”
– Gordon Ramsay