Belgravia: the celebrity stage set for all ages 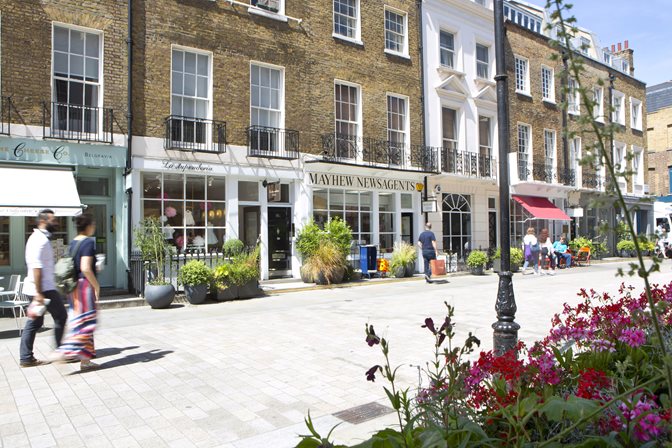 What do Mozart, the manager of the Beatles, Joan Collins, three knighted Bond actors, the creator of Frankenstein and a Julian Fellowes period drama have in common? Why, Belgravia of course. The dramatic architecture and visual continuity of this famous neighbourhood have helped to make it a favourite address for celebrities and notable characters of all types, especially those involved with the screen.

What’s remarkable is that before the 1820s, this was a rural, marshy area, and indeed a one-time haunt of highwaymen. The house in Ebury Street in which Mozart composed his first symphony sold in 2019 for £7.5 million, but it would have felt very different when the Austrian prodigy lived there in 1764.

The moody atmospheric setting would surely have appealed to Mary Godwin, as she sat around a dinner table in Switzerland in 1816 with Lord Byron among others, inventing the tale of a scientist bringing a creature to life. By the time Mary Shelley (as she became) moved to Chester Square in 1848, her story Frankenstein was a phenomenon.

And in the intervening three decades, Belgravia had been transformed by master builder Thomas Cubitt into a series of colonnades and rows of grand porticos, linking – on a north-south axis – the key addresses of Belgrave Square, Eaton Square and Chester Square. The new grandeur was a favourite study for novelists and satirists. In The Way We Live Now (1875), Anthony Trollope’s enduring tale of a stock market scandal, Mr Longestaff looks down on everywhere but Mayfair. ‘Even Belgrave Square, though its aristocratic families must be admitted, still smelt of mortar.’

Belgravia increasingly became the address of choice for the elite classes, helped by its convenient central location and proximity to Buckingham Palace. But then as now, the area was designed to be open to all. Artisans, managers, coachmen and provisioners to the grand homes needed to be close at hand. “You can’t only have palaces,” says a lead character in Julian Fellowes’ Belgravia. “You must house the supporters of the princes.”

Amongst those born in Belgravia was actor Sir Christopher Lee. He played the monster in Hammer Films’ key production The Curse of Frankenstein (1957), and, in the 007 outing The Man with the Golden Gun (1974), he had the role of Francisco Scaramanga, one of the most charismatic Bond villains of all.

Playing opposite Lee in the Bond franchise was Sir Roger Moore, who was another Belgravia resident. So too was Sir Sean Connery, and, before him, Bond’s creator himself. In 1936, Ian Fleming leased a flat at 22b Ebury Street, an ideal bachelor setting in which he entertained his many girlfriends. While living there, he established Le Cercle, his informal dining, bridge and golf club, all of which surely informed Bond’s memorable traits.

The Sixties and Seventies saw rock-‘n-roll’s aristocracy arrive. Beatles manager Brian Epstein bought a house on Chapel Street after steering the Fab Four to super stardom. John, Paul, George and Ringo were round there regularly. Mick Jagger lived in Chester Square. The area’s reputation as a celebrity place of arrival was secured. But actors, entertainers and impresarios have always loved Belgravia. Eaton Square alone has been home to an array of stars and star makers including Vivien Leigh, Joan Collins and Andrew Lloyd Webber.

One reason why entertainers feel at home here is surely its resemblance to a giant stage set, courtesy of Mr Cubitt. His cream-stucco frontages and graceful green squares and crescents have remained remarkably intact, notwithstanding the Second World War, when bombs fell and Belgrave Square Garden was transformed into a tank park. In another era, Cubitt could have been an Oscar-winning production designer.

No wonder Julian Fellowes has used Belgravia for his eponymous story. Equally, how fitting that Belgravia is home to two seasonal open air cinemas on Halkin Arcade and Eccleston Yards, showing sporting events and screen favourites. Surrounding them are the latter day equivalents of the artisans and provisioners depicted in Belgravia – the fashion and jewellery boutiques, lifestyle shops, restaurants, cafés, cupcakes and cronut suppliers, and wellness oases. It is part of Grosvenor’s longer term aim of creating active neighbourhoods and better streets, and it reminds us that Belgravia and its colourful cultural life are neither old nor new – rather, timeless.