Interior designer Ana Engelhorn specialises in all sorts of projects, from cosy corners to showstopping spaces. 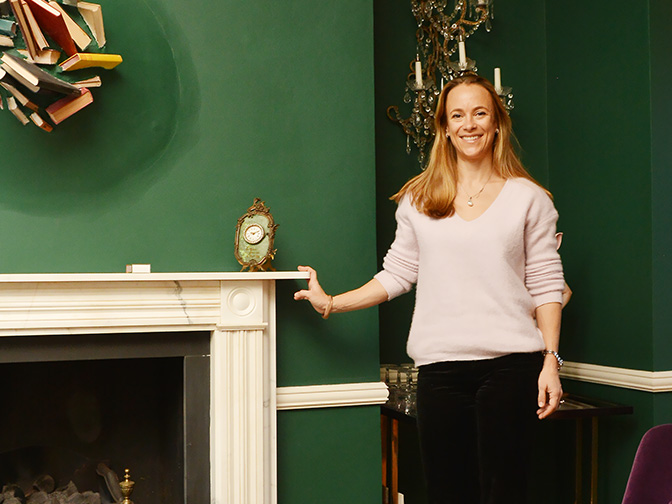 Interior designer Ana Engelhorn specialises in all sorts of projects, from cosy corners to showstopping spaces – and she’s just relocated to Belgravia

What makes a house a home? Well an interior designer certainly helps. Ana Engelhorn’s Eaton Terrace abode is enchanting; stylish statement pieces and arty knick-knacks pepper the five-storey townhouse. A chandelier of clear, coloured bottles takes centre stage in the ground-floor dining room, a vivid purple chair from Gallery 25 on Pimlico Road adds a pop of colour in the first-floor lounge, and protruding from the wall is a giant 3D sculpture with colourful books embedded into the plaster. In short, there are funky conversation starters everywhere you turn.

Ana says she takes great pleasure from sourcing interesting pieces, but admits that more often than not the reality of the job involves its fair share of more mundane tasks. “I would say interior design is 80 per cent admin and 20 per cent designing,” she says. “I love the process of going out to find things and I love the organisation part as well.” The 36-year-old moved to Belgravia from Spain with her husband and two children in spring last year. Setting up home in one of the capital’s most coveted and creative neighbourhoods was no chance encounter – Ana spent nearly all her teenage years in the heart of the community.

“My mother had an apartment on Ebury Street, so I lived here from 11 to 18 and I got to know it quite well,” she says. Belgravia then, she reflects, was quite different. “It was a lot grungier,” she says. “Now with coffee shops and little independent stores trying to revive themselves, it has changed completely. People have realised that these things are important and I don’t think that was so evident 20 years ago. It has really evolved.” Born in Switzerland to a German father and a Spanish mother, Ana started honing her interior design skills – albeit unknowingly – at an early age. As a small child she would often rearrange her bedroom and was very particular about the positioning of her bed. “When you change your room around, you make it new again, you refresh it,” she says. “Actually my daughter has the same thing.

She does paintings and decorates her room.” The rearranging would stop abruptly when Ana moved to the capital, to attend boarding school, aged 11. Seven years later she returned to her native Switzerland, heading to the mountains of St Moritz to pursue her love for the hospitality industry. “I studied business administration and then I went to work in the hospitality and events industry,” she says.

At that stage a career in hospitality seemed inevitable. “I never thought I could do interior design professionally. It was only when certain people started encouraging me that I started thinking it might be possible. “That is when I decided I wanted to study it, so I knew the ins and outs.” With established contacts in London and a thriving industry, the family decided to move here last year. “My children are at an age where it’s great for them to live in a different culture, to learn English and experience the lifestyle here,” she says. “My husband also has a job where it doesn’t matter where he lives, so he was actually quite excited for the move. It all just came together.”

With a love of reviving period buildings and working with authentic materials, Ana was only ever going to move to Belgravia. “I knew Pimlico Road and it’s one of those roads W you can walk down, be inspired and if you’re on a project, you can go and talk to different suppliers and that is great.” Since embarking on her new career path, the projects have varied from a small-scale project in Barcelona to a two-year overhaul of a 16th century farmhouse on the Costa Brava. “It had two towers from the 16th century and they used to warn the castle if pirates were coming. It was full of tiny rooms with fake ceilings and it was a case of taking everything out. We had to redo the floors and the roof.”

Much of her inspiration she traces back to her parents. She remembers being taken to art exhibitions and fairs, which stoked her imagination at an early age. “My parents are amazing,” she says. “They would never call themselves interior designers, but they love buying interesting or historic buildings, converting them and making businesses out of them. “One of the hotels they have done is in the Costa Brava; it produces its own olive oil and wine and grows its own vegetables. There are pigs and sheep and milk products too. It was my father’s dream to live off his own land.”

Ana’s own vision has already become a reality and she is excited for the future, with recent interest from a commercial client in Switzerland and a hotel group in the Cotswolds. “They have amazing, period buildings,” she says of the latter. “That would be a dream.”