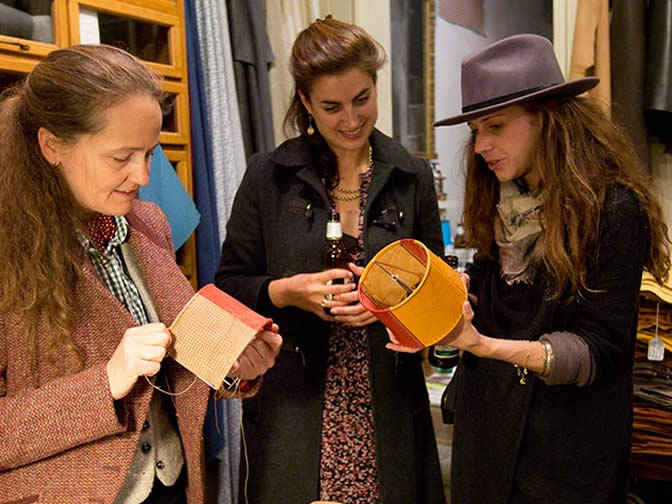 We caught up with Penelope Sacorafou, the woman behind this year’s Designed in SW1 event.

Fox & Squirrel is still in its infancy, but has amassed a wealth of experience in organising and running what it refers to as, ‘creative walks for the culturally curious’. Founded by Penelope and Jojo Provatidou in 2010, the company quickly gained momentum.

Fast-forward three years and Penelope is now running Fox & Squirrel solo. The company has expanded its repertoire to include walks focused on art, fashion, food, street photography, architecture and film. The business was responsible for organising Grosvenor’s Belgravia in Bloom guided tours earlier this summer, and the team is delighted to be working with the London estate again. “It’s been really fantastic working with Grosvenor,” says Penelope. “They have been open to a lot.”

This year’s Designed in SW1 programme includes talks on everything from the evolution of the kitchen and its position in the British household to the relationship between design and food. The list of participating retailers includes innovative interior designer Rose Uniacke and hand-knotted rug designer and manufacturer Luke Irwin, to name just a couple.

Rose is set to host a talk with Michael Krzyzanowski, an established and published design consultant, filmmaker and specialist in modern design, and will also be exhibiting a series of chairs from her latest collection. Meanwhile, Luke’s Pimlico Road shop will form the meeting point for a guided walk that highlights the expertise of some of London’s most acclaimed designers. On display will be Luke’s famous collection of rugs, inspired by the third-century Roman mosaics he found under his house in a stroke of fortuitous serendipity.

Penelope reveals that she is particularly looking forward to the ‘Kitchen Evolution’ talk that will be held on 20 September. “In my 32 years I’ve really witnessed the role of the kitchen change,” she says. “I remember my grandmother would cook in the kitchen alone and suddenly this amazing food would enter our dining room. Years later, we had open-plan kitchens and living rooms, and eventually the kitchen became the main hangout point. So that’s the talk that really excites me.”

The talks will bring together an acclaimed panel of design and interiors experts featuring Lionel Real de Azúa, a founding director at Red Deer Architects, and David Dewing, Director of the Geffrye Museum.

“People have been cooking since the discovery of fire, so the earliest ‘kitchen’ was an open fire in a cave or shelter, a place to prepare and cook food, and gather round for warmth and conversation,” David notes. “Today, in all but the grandest houses, the kitchen is the room where we live, work, cook, entertain and play; the ‘living kitchen’ is the essence of home.”

While a handful of the events are free, others are ticketed, so make sure you book ahead to avoid disappointment.

“Our aim is to elevate Belgravia and show the talent that is present, but to also encourage those with an interest in design to visit the area,” says Penelope. “Although many see Belgravia as quite an exclusive location, the retailers are not exclusive and really welcome new faces. So this is an attempt to make sure that message gets out.”

Click here for the full programme of events and here to purchase tickets.