Born to run the family business 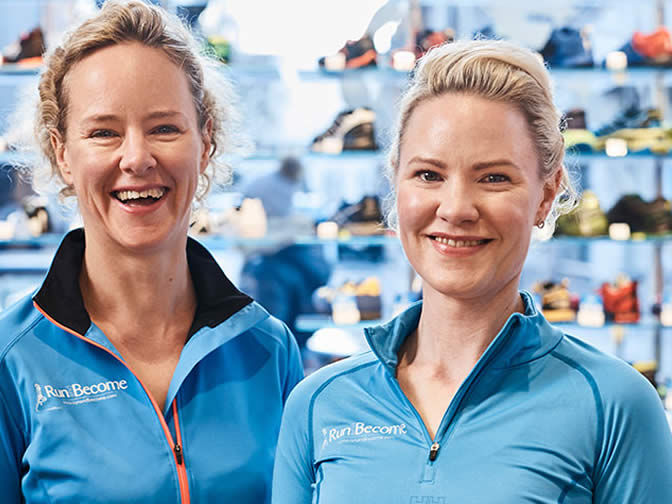 Dipika and Shankara Smith, co-owners of specialist running shop Run and Become, discuss childhood, running in Belgravia and the importance of continuing their father’s legacy.

Surrounded by running memorabilia and on the sidelines at every race sponsored by Run and Become, Dipika and Shankara soon grew to love the sport. “We basically lived and breathed running,” says Dipika. Every Saturday, the sisters could be found helping their parents at the Palmer Street store. As they got older, weekends were a blur of marshalling Sri Chinmoy races and making marmalade sandwiches – this was in the days before energy bars.

Athletics and cross-country races were a regular part of the girls’ childhoods – though Dipika preferred sprints and her sister excelled at distance running. Shankara ran her first marathon aged 17 – which, she divulges, was technically illegal. “In those days, they didn’t check too carefully,” she explains.

The same year, partway through her A-levels, Shankara left school and started working in the shop full time. Three years later, Dipika did the same. “[Our involvement in the business] happened really gradually,” she recalls. “Our parents wanted us to know everything they knew, and more. They were both incredibly generous.”

“We were never pushed into it,” Shankara chimes. “I think it was probably expected, but that was never made obvious to us.”

Over the years, Dipika and Shankara became more and more involved in the business. Then, 10 years ago, their father passed away. Thankfully, by that stage, Shankara was largely responsible to the day-to-day running of the business, having given her father more time to organise races and events through the Sri Chinmoy Athletics Club. By the time he died, Shankara knew everything there was to know.

“Because dad had been very self-giving and was happy to share, it was always a partnership,” she explains. “There were no egos involved. We were lucky in that we never had to work at a working relationship – it just evolved naturally.”

The business has developed just as organically in the years since Smith’s passing. Alongside running shoes and other specialist gear, Run and Become now organises drop-in clinics and regular ad-hoc events at each of its three branches (following the opening of the Edinburgh store in 1991, a third opened in Cardiff in 2000).

“The diversity here is brilliant, because we’re also unique”

These additional facets of the business started by accident when Chris McDoogle, author of Born to run, chose Run and Become as the UK site for his book launch. McDoogle contacted Run and Become after learning that the store sponsored the Sri Chinmoy Athletics Club. “I got this call and this manuscript through the post, which sat on my desk for a few weeks,” Shankara recalls. “I had no idea who he was, or what the book would become. Eventually, I picked it up – and by the end of the first page I was hooked.”

The book launch went so well that Dipika and Shankara decided to host more events, and soon talks by authors and physiotherapists became a regular part of their calendar. They currently run a drop-in clinic at the Eccleston Street store every Tuesday, but are also planning a series of preparation events leading up to the Marathon de Sables – a six-day, 251km ultramarathon held in the Sahara Desert in April – in addition to talks on the London Marathon.

In November 2015, the London branch moved from Palmer Street to its current residence on Eccleston Street. “We thought it would be a big wrench, having been there for 33 years, but the move went very smoothly,” Shankara reveals.

“You come to realise that you move the soul of a company with you,” adds Dipika. “As soon as we opened, we knew that this was us.”

Along with great new running routes, the new location provides more space –inside and out. All staff are trained in natural gait analysis (the study of human motion), and the broad stretch of pavement outside the store is the perfect area for monitoring the effect of new running shoes. “We’re in a place where you feel like you can breathe,” Shankara explains. “It’s also a beautiful area and the local shop owners are lovely; there’s a real sense of community.”

“It’s nice to have so many independent brands nearby,” Dipika adds. “For us, the diversity here is brilliant, because we’re also unique. We love the little pooches we get in here, too. We’ve started buying dog biscuits from Mungo & Maud so we’re ready for them!”

Cute canines aren’t their only VIP customers. Just weeks ago, Eddie Izzard stopped by to stock up on running gear before embarking on a staggering 27 marathons in 27 days across South Africa – one for every year Nelson Mandela spent in prison – to raise money for Sport Relief. Since completing a similar feat in 2009 in the UK (43 marathons in 51 days), Izzard’s been a regular customer.

It’s fitting that the comedian’s determination, like that of Dipika and Shankara, echoes the sentiment that kick-started the business 34 years ago. “Running helps us considerably,” Sri Chinmoy once said. “Because of our running, we feel that there is a goal – not only an outer goal but also an inner goal.”