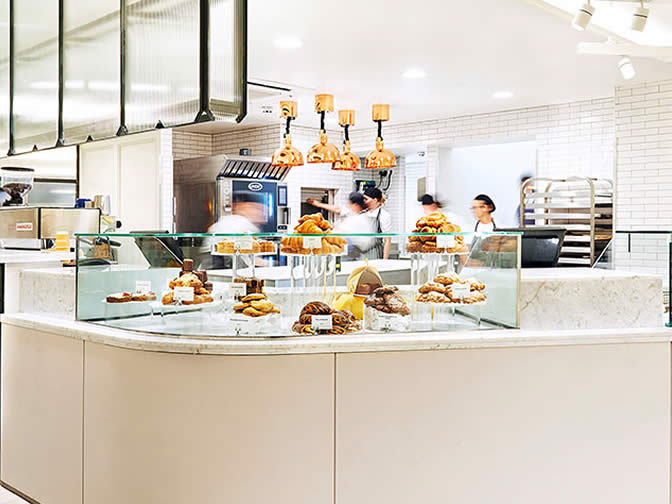 Dominique Ansel, famed for his inventive recipes and reputation as a real-life Willy Wonka, talks to us about his recently launched bakery in Belgravia.

National Baking Week is likely to inspire a Great British Bake Off-obsessed nation into the kitchen to experiment with new and ambitious recipes. Few can dream of achieving the success of French pastry chef Dominique Ansel, but anyone who’s ever been curious about a Cronut® can now pick one up in London. Happily, the Dominique Ansel Bakery opened its latest branch in Elizabeth Street in Belgravia in September.

Dominique’s Cronut® – a cross between a croissant and a doughnut – made headlines around the world upon its creation in 2013. A playful inventiveness is at the heart of everything Dominique serves in his bakeries, along with a lot of hard work. The Dominique Ansel Bakery in London is the fourth of its kind, in addition to two branches in his adopted home of New York and one in Tokyo. Belgravia’s community feel was integral to him setting up shop there.

“A bakery is a local business,” he explains. “We need customers to come every day and to have an interaction. Belgravia is a beautiful neighbourhood and very charming.”

After falling in love with working in kitchens in Paris, Dominique began his career as a pastry chef at legendary gourmet food and delicatessen company, Fauchon.

“After eight years I was in charge of international openings and travel,” he says. “I was travelling the world and training people, so I definitely learned a lot at Fauchon.”

This international experience led to Dominique being offered a job in New York by French chef and restaurateur Daniel Boulud in 2006. Five years later, the first Dominique Ansel Bakery was born.

“I found this beautiful, tiny shop in SoHo in New York and decided to take the big step and open my own shop,” he says. “I left Daniel and opened with just four employees at the time. It was very simple, very humble and we worked very hard every day to deliver good quality food and to change the menu with the seasons.”

Dominique’s use of regional ingredients and new takes on classic dishes is part of his food’s allure. He adapts the menu of each bakery based on its location and estimates that more than a third of each menu is dedicated to unique dishes inspired by local ingredients and his research into different countries’ culinary cultures.

This raises the question of what surprises Dominique has on the menu at his new London location.

“A banoffee paella,” he chuckles, “which we prepare in a paella pan so it’s a little bit upside down. We cut it, flip it on the plate and serve it with a big dollop of whipped cream and some beautiful caramelised banana. We add a very light cream and a little cookie crumble. It’s really delicious and the presentation is fun.”

Dominique has also utilised what he refers to as the “worldwide influence” on London’s cuisine to create a French-Indian dish.

“We’re also doing what we call the dosa mille feuille,” he reveals. “It’s a very thin puff pastry – super thin, like paper – that is shaped like a dosa (a kind of Indian pancake, made from a fermented batter). We pipe in a very light hazelnut cream with some lemon confit. It’s a different presentation – really unique and exciting.”

Finally, he’s also made room for a new take on a British classic, the Eton Mess.

“We serve it in a small box, almost like a lunch box,” he explains. “It looks like some beautiful strawberries that are delicately dropped in a box. We’re asking people to take the box and shake it to make the Eton Mess. It’s really fun.”

There are also plans to add a high tea to the menu later this year.

Dominique admits it can take anywhere between a few days and a few months to perfect a new dish.

“It’s about knowing what we can do technically, scientifically and how we can combine the ideas,” he says. “I was working on the banoffee paella for about two months!”

As that suggests, Dominique takes a patient approach to perfecting dishes.

“I believe in a culture where chefs are calm, good teachers and leaders,” says the man who’s banned swearing in his kitchens. “You can see a lot of good results: employees aren’t afraid of asking questions, so they grow faster and stay longer with us. When I see my customers happy and my team happy, I can’t ask for anything else.”

Head to 17-21 Elizabeth Street to try one of Dominique’s latest creations.