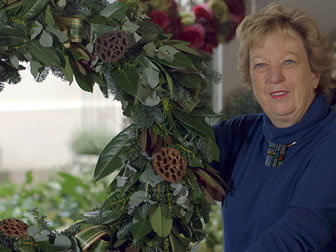 Judith Blacklock has created a completely biodegradable wreath that can be used for any occasion.

Remembrance Sunday is a chance for the nation to take a moment to remember those who lost their lives in wars around the world. One of the key moments each year is the placing of a wreath on the Cenotaph in London’s Whitehall.

This year, the Commonwealth War Graves Commission (CWGC) wanted something different for their wreath.

Belgravia-based florist and author Judith Blacklock suggested a completely biodegradable wreath. The wreath was laid at the Cenotaph on Remembrance Sunday.

As well as teaching at her flower school in Kinnerton Place and writing her books, Judith is a Fellow of the Institute of Horticulture, along with her friend David Richardson. David is also the Director of Horticulture for the Commonwealth War Graves Commission.

“David came to me and asked if I could suggest some new ideas for wreaths to celebrate the CWGC’s centenary, which is this year,” explains Judith. “I suggested a completely biodegradable wreath that would eventually go back into the earth, as we all do. The wreath commemorates people who have been lost in all wars.”

Creating the wreath was “quite easy, and something that can be done at home”. The base is made from willow, which is soaked in water for a couple of hours (or overnight if you have the time) and bent into a circular shape. It’s held in place by smaller strips of willow, creating a completely natural base.

The foliage used in Judith’s design is gaultheria – ideal because it’s available all across the world.

Along with the plain green wreath for the Cenotaph, Judith also came up with a design that represents the six principal countries in the CWGC.

Australia, New Zealand, India, South Africa, Canada and Newfoundland, and the UK are each answered for in her special wreath, through plants native to each of the countries.

For Australia, Judith uses eucalyptus, sometimes known as the gum tree. “This plant has nice neat leaves and is a lovely silver grey. These trees grow extremely tall in Australia,” Judith explains. New Zealand is represented by the phormium tenax, or flax, which “brings life and vitality” to the wreath.

“The leucadendron ‘safari sunset’ represents South Africa,” says Judith. “It’s a very prolific grower and can last up to three months in a wreath.” Turning to India, Judith explains that the lotus flower seed pod is used because when buried in mud, it rises up through water and blooms. “It’s also the symbol of purity and patience,” she says.

Canada and Newfoundland is represented by a spruce, which Judith explains is the common Christmas tree. The UK features twice in the wreath, once with yew, which is traditionally grown in churchyards and “gives plenty of texture to the wreath”. There’s also laurel, for people who don’t want to use yew.

Get creative with your fauna

“This method of creating a biodegradable wreath can be adapted for any event,” says Judith. “You can create one for Thanksgiving, for harvest, Christmas and it’s easy to change according to the season and occasion.”

Judith’s flower school offers classes both for those who want to arrange flowers as a hobby or as a business. Students need no prior experience or knowledge, just a passion for flowers.

To find out more about the Judith Blaclock Flower School, visit judithblacklock.com.