A fictional remedy for tomorrow’s world 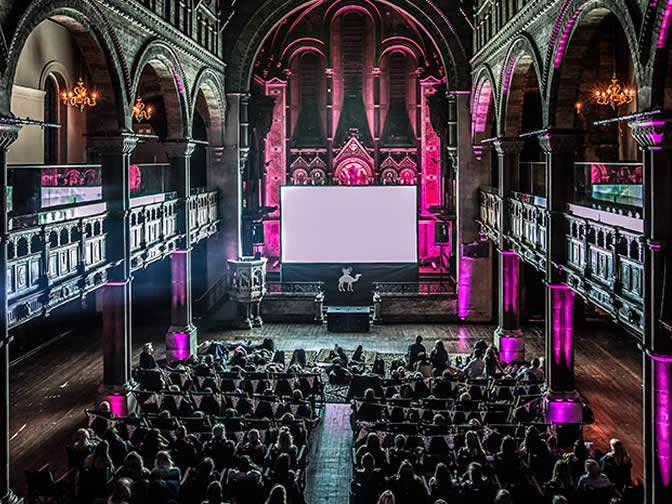 Sally Wilton, Founder of the Nomad pop-up cinema, believes film has a role to play in supporting sustainable communities.

In 2006, Sally decided to make her dream a reality. “I found a building round the corner from my house in Kensal Rise,” she recalls. “I’d lived in the area for 30 years and had never noticed it until a ‘to let’ sign appeared outside. It was Christmas Eve. I rang the estate agent and they told me to come back in the New Year, so that’s what I did.”

When Sally rang back after Christmas, she discovered that the property had already been let. Convinced that the space was meant to be a cinema, she persuaded the agent to put her in touch with the sellers.

“I put this three-page impassioned plea through their letterbox,” she recollects. “They agreed to meet me, despite thinking I was completely barking mad, and somehow we managed to strike a deal.”

In 2008, after a total overhaul, the Lexi Cinema opened, creating a real community buzz.

But that’s just half of the story. Two years after the Lexi’s launch, Sally decided to expand the business, and the Nomad pop-up cinema was born.

“What we wanted to do with the Nomad was take the Lexi magic out on a rolling basis,” she explains. “We’ve got a very light eco footprint, so we pop up in the mornings and then de-rig in the night, leaving the place exactly as we found it.”

As a case in point, Sally refers to the Nomad’s recent screening of Purple Rain at Festival Gardens. “The City of London Corporation was a little anxious about its flower beds,” she explains. “The next morning I went across to have a look at the site, and everything was perfect. It was as if we’d never been there.”

Six years after launching the Nomad, the pop-up venture has grown from putting on a dozen screenings at a handful of venues in the summer of 2011, to running close to 100 this year across the capital and beyond. All proceeds from both the Lexi and the Nomad go to the Sustainability Institute, a South African charity that supports sustainable ways of living.

“After spending my formative years in Nigeria, I worked as a fish farmer in Tanzania and later lived in Namibia, so I’m very familiar with Africa and really identified with the Institute’s cause,” says Sally. “I never thought our partnership would work as well as it has done, but it’s been incredible.”

The charity’s community ethos reflects the cinema’s own business model, underpinned by local volunteers. “We’ve got a fantastic team of employees who are incredibly dedicated and hard-working, but we run on the battery power of volunteers,” Sally explains. “That gives the business this really human feel.”

Alongside encouraging local members to give back by volunteering, the business also draws attention to the charitable and social aims of the venues it visits. It uses Fairtrade suppliers such as Divine Chocolate and partners with hard-working small businesses, including catering company Madame Gautier.

Earlier this year, Sally received the Prime Minister’s Points of Light Award, an accolade that recognises people who are making a change in their community. It’s a significant plaudit, but one Sally’s incredibly understated about. “It’s very much an award for our volunteers,” she explains. “For the Prime Minister to notice what I’m doing is wonderful. But the award is not for me; it’s for everybody who makes the business a success.”

Looking to the future

The Nomad has worked in conjunction with Grosvenor for the past three years, hosting a range of pop-up screenings in stunning locations across the London estate. This year, in addition to the usual venues of Brown Hart Gardens, Wilton Crescent Garden, Eccleston Place and Belgrave Square, St Mark’s in Mayfair and the Bermondsey Biscuit Factory were thrown into the mix, providing two very different urban backdrops for a series of classics and new releases.

“Pop-up cinema is a way of animating spaces and creating a sense of place,” Sally explains. “Placemaking is very important to Grosvenor, and because we particularly like driving community engagement, the partnership has worked incredibly well.

“The Nomad is a place where you can create memories,” she adds. “But in addition to that, by buying a ticket you’re making a difference in another part of the world. The money that’s covenanted in South Africa transforms lives. And what’s better than that?”

To volunteer with the Nomad, please email volunteer@whereisthenomad.com or click here to book tickets.