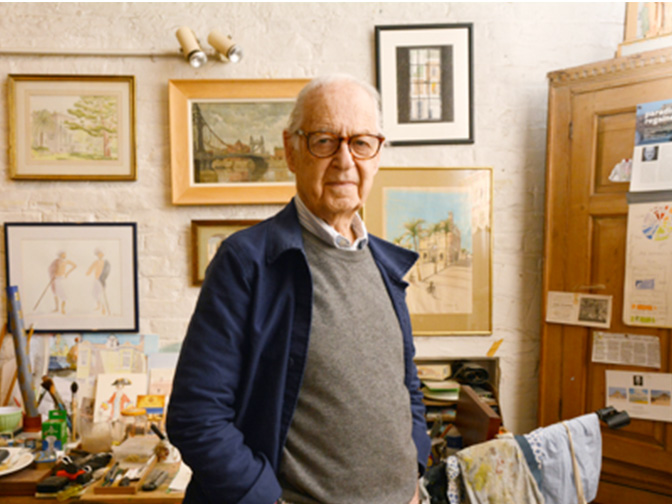 Acting legend and artist Sir John Standing talks treading the boards with Laurence Olivier and wild times with Peter O’Toole ahead of his exhibition at Osborne Studio Gallery.

Sir John Standing is holding court in the only way he knows how. Within minutes of entering his treasure trove of a home – a former 19th century stables, top-to-toe with theatre and film memorabilia in homage to his fabulously colourful life – the distinguished actor is staging a tour-de-force performance. He’s 84, but you would never know it. He has the raw energy of a boisterous border collie and flits from one topic to the next – rat-a-tat – with the occasional segue into an outrageous anecdote.

We cover Brexit while he makes builder’s tea (he voted remain and booms that “it’s just b****y rude!”), the new TV in his studio (“my wife gave it to me for Christmas, look at this f****** thing, boom!”) and there is even time for a brief, impromptu tap dance (he is soon to star in cabaret at The Pheasantry in Chelsea). This is glorious, old-school charm at its finest. There is no self-censoring whatsoever; he peppers sentences with expletives, discloses starry tales at the drop of a bowler hat and is candid about the good, the bad and the occasionally ugly.

We meet to chew the cud about his upcoming exhibition at Belgravia’s Osborne Studio Gallery – an art student in the 1950s, John’s paintings have been showcased in London and America, with a selection of landscapes from India to LA heading to Motcomb Street next month – but soon venture deliciously off-piste. John has never been one for convention. At 16 he was thrown out of church for smoking; he responded by complaining about the lack of ashtrays. His rebellious nature was formed at a young age. He despised being sent to prep school aged eight and recounts how the headmaster, a canon in the church, used to haul him in for beatings.

He found Eton – following in the footsteps of his father and grandfather – equally terrifying. “I was terribly naughty and finally they had enough when I was tap dancing on a master’s desk.” National service led him to the King’s Royal Rifle Corps. He spent two years in Germany and began a relationship with the manageress of a cookhouse. “It was deeply frowned on, as you can imagine,” he says, adding: “But she was adorable.” While he grew up idolising cricketers – “I used to collect photographs and have albums filled with terrible newspaper cuttings” – he would go on to work with some of the biggest stars of stage and screen.

His very first acting job was carrying a spear in Shakespeare’s Titus Andronicus, alongside Laurence Olivier and Vivien Leigh. “I was dressed as a green priest with a huge, great phallic hat on,” he recalls. “Olivier used to walk past and say, ‘Good evening potato face’.” John went on to star alongside Maggie Smith in Noël Coward’s Private Lives and in countless theatre productions. He then embarked on an extensive film and TV career that has included The Elephant Man, Downton Abbey, The Crown and Game of Thrones. “I’ve been frightfully lucky and have worked with some wonderful actors,” he says. “I like actors who are prepared to not behave necessarily terribly well.”

Enter stage left, Peter O’Toole. The hellraising star became one of John’s closest friends and was his daughter’s godfather. “Oh my God we had some wild times,” John says. “He once said, ‘Johnny, have you ever f***** a nun?’ I was staying with him in Ireland. I said, ‘Do you know, I haven’t’, and he said, ‘Well why don’t we go and try?’” They duly arrived at a nunnery to be met by “a little red-faced girl and a big brown earthenware teapot”. “We went to the lavatory and came out and this girl got on the table and said [he starts to sing], ‘Well the hills are alive, with the sound of f******!’ “We couldn’t believe it. This was a nun, but an Irish nun and they are different, believe me.”

Years later, John recounted these antics at O’Toole’s funeral. “From the side of the stage a voice said, ‘John Standing, there was no brown teapot.’ She was there! Can you believe it? [The nun], she rings me up and we go and play golf. She’s over 80 now – still alive and kicking.” As is John mercifully, railing delightfully about Hollywood.

He is also refreshingly candid about his own life. “My grandfather, who was absurdly rich, left my brother and me £40,000 each, which was a f*** load of money in 1958,” he says. “My father broke the trust, spent my brother’s money, spent mine and when he died, we got £60 each, the two of us.” Was he angry? “No, not remotely. It’s the best thing that happened to me, because it means like everybody else I had to get in there and do everything myself.”

He hasn’t done half bad. It’s a reminder that baby, there is no business quite like showbusiness and nobody, I’d wager, quite like John Standing.

John Standing’s exhibition at Osborne Studio Gallery has now finished. To find out more information on the gallery visit www.osg.uk.com

“She was my wife’s godmother and we used to stay with her in New York. She had long finished acting when we were with her, but she was fascinating.”

“I did a picture with Elizabeth and every day at lunch we would go off and have endless bull shots. I couldn’t survive them, but she could. She never fluffed her lines and was 100 per cent professional, but she would give the bull shots a real thrashing.”

“I did three months with him, which was marvellous. He was quiet, fairly shy and in the evenings he would get into his battered old Rolls-Royce and drive himself home and sit in front of the television eating sandwiches. “He said his fame was awful, he shut himself away. All the stuff about him being gay was absolute nonsense. We had a long talk about it once and he said, ‘I’ve been married five times, for Christ’s sake!’”

“Frank said, ‘Do you want to take Nancy out tonight? I’m going to bed and you can take Nancy and Mia Farrow.’
It was pouring with rain in Vegas and we went to the Pink Pussycat. The man said, ‘Sorry, we’re full.’ A voice from behind us said, ‘It’s a Sinatra’ and it was like the parting of the Red Sea. We were given the best table and it was great being with Nancy, who was lovely.”